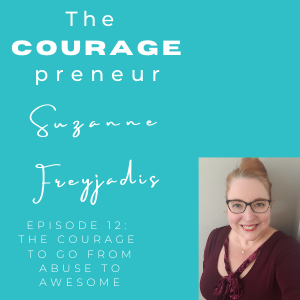 Suzanne Freyjadis, Founder & CEO of Soft Landing Society, left her abusive ex in 2018 after months of planning. As she was preparing to leave & after leaving, Suzanne realized that there was little support for women leaving abuse that is practical, useful and reaches women where they are, on their phones.

While preparing to leave, Suzanne designed a mobile game that she used to help her learn how to put herself first, so that she could leave.

She realized that no one could leave until they learn how to put themselves first, which is difficult after living in abuse.

Suzanne is a pioneer in diversity in gaming. She has spoken about diversity at universities around the world and with Soft Landing Society she will use her keen understanding of how to create bias neutral games so that the app will reach as wide an audience as possible.

Suzanne is a changemaker working to reduce the stigma women suffer when they are survivors of partner abuse. As a survivor herself of emotional abuse, Suzanne is talking about the effects of partner abuse on the survivors. She is also opening up the conversation, so women are able to discuss their abuse without the feeling of shame that often comes along with leaving an abuser.

Suzanne is an innovator whose MA thesis was one of the first in video game studies in 2005. As a result of her experience doing research in a new area of academia, she successfully launched & ran the Game Education Summit conference, which grew into profitability in 3 years. She also ran one of the largest international academic groups focused on video games for 8 years.

Listen in today as Suzanne shares her COURAGEOUS of leaving an abusive ex-partner and is still on a journey of self-healing and self-love, by being her true, authentic JOYFUL self.